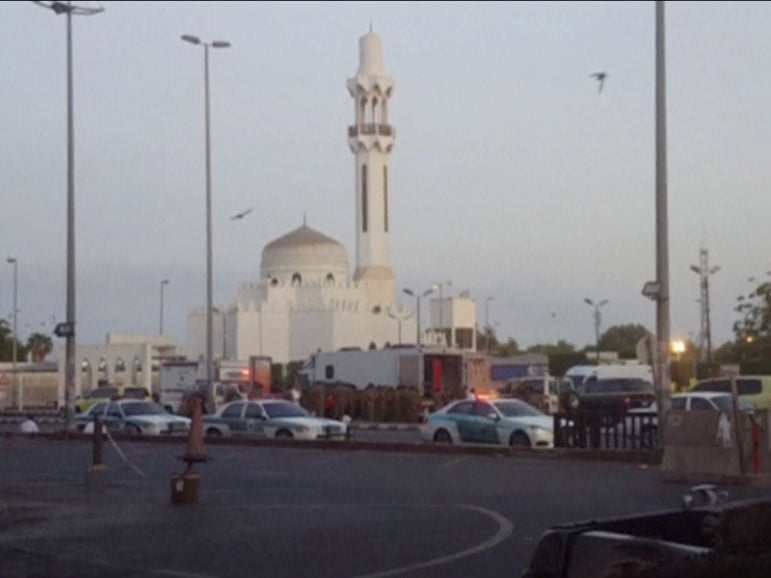 General view of security personnel in front of a mosque as police stage a second controlled explosion, after a suicide bomber was killed and two other people wounded in a blast near the U.S. Consulate in Jeddah, Saudi Arabia, in this still frame taken from video July 4, 2016. Photo courtesy of Reuters September 26, 2017 By Yonat Shimron ShareTweetShare

DUBAI, United Arab Emirates (AP) — The Saudi government continues to tolerate hate speech by some clerics against minority groups, while public school textbooks in the kingdom still include language that discriminates against other forms of worship, a new study by Human Rights Watch said.

The New York-based watchdog says that despite reform efforts and strong condemnation of attacks against Shiite citizens, Saudi officials have not acted to stamp out hate speech by state-affiliated clerics and government agencies.

The Human Rights Watch report, titled “They Are Not Our Brothers: Hate Speech by Saudi Officials,” said the Saudi state has permitted government-appointed religious clerics to refer to minority Muslim Shiites in derogatory terms, sometimes rising to the level of hate speech and incitement.

Saudi clerics mostly adhere to an ultraconservative Sunni interpretation of Islam known as Wahhabism — and many view other faiths and variants of Islamic worship as sinful.

The 62-page report said courts also discriminate against Shiites and that school curriculum stigmatizes Shiite and other religious practices. The report said Shiites and Sufis who practice Islam differently from conservative Sunnis in Saudi Arabia are a “prime target of Saudi-sponsored hate speech and intolerant rhetoric.”

The rivalry between the two regional powers has played out in proxy wars in Syria, Iraq and Yemen and has also fueled tensions between Sunnis and Shiites in Bahrain and Lebanon.

The extremist Islamic State group’s branches in the Gulf have targeted Shiites in Kuwait and Saudi Arabia, killing dozens of people in multiple attacks. The group considers Shiites apostates and refers to them as “rafida” or “rawafid,” which means people who reject Sunni Islam.

The kingdom has strongly condemned the attacks and says the newly established Department of Public Prosecution in Saudi Arabia has powers to charge offenders who are accused of spreading hate speech and inciting violence on social media, including anyone who attempts to “foment sectarian violence.”

Still, Saudi clerics — many of whom have millions of followers on Twitter— have frequently referred to Iran’s government, or even Shiites in general, as “rawafid.”

Earlier this year, Saudi Arabia’s heir to the throne, Crown Prince Mohammed bin Salman, ruled out dialogue with Iran, claiming that Tehran’s goal is “to control the Islamic world” and to spread the Shiite doctrine. He said Iran was founded on an “extremist ideology.”

Last year, Saudi Arabia’s most senior cleric, Grand Mufti Abdulaziz Al Sheikh, said Tehran’s leaders are “not Muslims” and said they were descendants of “Majuws”— a term that refers to Zoroastrians and those who worship fire. Zoroastrianism is a monotheistic religion predating Christianity and Islam and was the dominant religion in Persia before the Arab conquest.

Human Rights Watch says given the reach of Saudi Arabia’s clerics, their public anti-Shiite statements are instrumental in discrimination practices against minority citizens in courts and schools.

The report found that the religion curriculum for the 2016-17 school year does not mention Shiites by name but that it “uses veiled language to stigmatize Shiite religious practices.”

For example, Saudi religious education textbooks criticize visiting graves and shrines to venerate important people, a common practice among Shiites. The books describe this as a form of polytheism.

The textbooks also include similar language toward non-Muslim practices, the report said. Experts critiquing this curriculum have suggested that religious textbooks should instead draw from multiple lines in the Quran that emphasize coexistence, compassion and tolerance.

The Saudi government has responded to such criticisms in the past by establishing a $2.4 billion program in 2007 responsible for curriculum reform, including the training abroad of tens of thousands of Saudi teachers in order to open young Saudi minds.

U.S. Secretary of State Rex Tillerson has also said that one of the initiatives of the Saudi-based Global Center for Combating Extremist Ideology is to publish new textbooks in Saudi Arabia and in mosques around the world to replace current books that “advocate extreme Wahhabism viewpoints around the justification for violence.”

This article comes from the Internet and does not representwhats my zodiak signPosition, please indicate the source for reprinting：http://www.myaroo.com/23/1573.html
17like
Label:zodiac sign for july 31