Figure 1 shows the seven extant Chariot cards from the 15th/16th centuries. The Chariot card was number eight in the type B ordering. The Chariot on the early cards appears as a 2-wheeled chariot pulled by white horses. 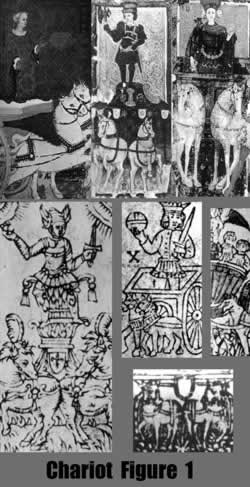 Indeed, that is all we can say about the fragment in the lower right corner. Two appear to be war-chariot with a male victor within. One is a king and the other appears to be a duke, judging from the hat. The other four appear to be processional chariots since the rider is atop, rather than within, the chariot. One appears to be an Empress, perhaps representing Petrarch’s Triumph of Chastity. Another appears to be a victorious duke. The third appears to represent the Triumph of Mars or Mercury. The fourth partial card appears to show Cupid as the central figure and a couple seated in the chariot, perhaps representing Petrarch’s Triumph of Love.

Representations of the chariot as a war vehicle are common even from ancient times. Chariots appear on Roman medals (Grabar 1968, fig. 83) and in pagan catacombs (Portella 1990, p. 74). Examples can be found in Egypt

In the astrological imagery of the 15th century, one often finds Mars depicted in a Chariot (Figure 2). A similar image can be found in the so-called Tarocchi de Mantegna prints.

Other examples of Mars in the Chariot can be found at

The religious tradition goes back to Ezechiel’s vision of the Chariot. Elijah was also carried to heaven in a fiery Chariot. Saints, such as Francis of Assisi, were also depicted as being taken to heaven in a Chariot: 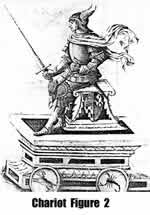 One of the early Tarot cards (Figure 1) appears to represent the Triumph of Love. Examples of the traditional imagery associated with that triumph can be found in the chapter on the Lovers card. 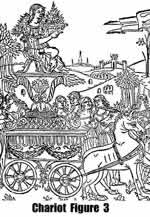 Another of the early cards (Figure 1, upper left) seem to represent Petrarch’s Triumph of Chastity: “She wore, that day, a gown of white, and held the shield that brought Medusa to her death.” Perhaps the representation on this early card was chosen to honor the duke’s wife when the hand-painted deck was commissioned. The Tarot card resembles the traditional image of the Triumph of Chastity though the chariot is usually depicted as being drawn by unicorns (Figure 3, 1488). Other examples of 15th century images can be found in Gombrich (1972, plate 143) and Carnelli (1971, plates 1 and 6). Another image is accessible on the web:

No imagery resembling the Chariot card occur in the Dance of Death tradition.

The prophets Daniel and Ezechiel discuss visions of the throne of God as a chariot. These visions were an integral part of the Judeo-Christian tradition of the apocalypse. However, the chariot only rarely occurs in the artistic tradition associated with the Book of Revelations. I located only a single example representing Ezechiel’s vision of the Chariot combined with Christ’s ascension (Grabar 1968, plate 1).

One of the early cards appears to be an astrological image. The reference is probably to the war god Mars. But it is difficult to make hard and fast rules as to which planetary god might be represented since many of the planets are represented in this way (Seznec 1953, p. 169). One can certainly find images of Mercury and Mars (Seznec 1953, pages 75, 129, and 190ff). One also finds representations of the Triumph of Apollo with the nine muses:

This image is interesting for the association of the Chariot of Apollo who represents the Sun and is accompanied by Fortitude with broken column, Justice with sword, and Temperance pouring from a vase.

The most likely associations that the Chariot card (#8) would have been status or victory. The card-player would have seen or heard of triumphal processions after local victories or the triumphal entry of visiting dignitaries. But the Wheel of Fortune card (# 10) might well have reminded the player of the foolishness of such hubris and display.

The player would also have known the poem of Petrarch and might well have caught the association of the Triumph of Chastity (#8) following immediately after the Lovers card (#7). This might have elicited feelings about the moral and spiritual journey described in Petrarch’s poem.

The card-player would also have seen triumphal images of the planetary gods. Such images were often found in public art. Some level of belief in astrology was almost universal and although divination was condemned by the Church, the card-player may well have had the experience of consulting an astrologer prior to a wedding or a major business deal.

The more spiritually minded card-player might have seen a reference to the mystical vision of Daniel and Ezechiel in the Chariot card. Even the illiterate had heard the stories of the old testament prophets in sermons. The player might also have seen or heard stories of the ascend of St. Francis in a chariot. So the Chariot card might have elevated the player’s mind to thoughts of the spiritual life. 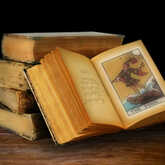 This article comes from the Internet and does not representwhats my zodiak signPosition, please indicate the source for reprinting：http://www.myaroo.com/15/1140.html
2like
Label:november second zodiac sign

Why We Are Witches: An A-Camp Roundtablemay 13 2016 horoscope