Students returning to school, this fall, may encounter new steps to limit spread of the coronavirus. At the same time, many of these kids may harbor harder-to-measure side effects of the pandemic, such as feelings of trauma and loss.

It’s the start of a new school year. Most years, that means backpacks stocked with fresh pencils, crisp notebooks and snacks. This back-to-school season, many students will carry extra baggage. They’ll hit classrooms toting traumas, worries and gaps in their learning.

Students are returning even as the pandemic continues to morph. The more contagious delta variant of the coronavirus is spreading. These infections put new twists on questions over how not only to stay safe while learning but also protect unvaccinated classmates. Such responsibilities may change yet another school year.

When school buildings abruptly closed in the spring of 2020 and school shifted online, kids lost more than learning. Many students lost the ability to regularly spend time with friends and teachers. They missed out on gym class and organized sports. Many missed music lessons and clubs. They didn’t get time to goof around at recess. Some kids even lost their voices as frustrated teachers told them: “I’m muting you.” They digitally imposed a silence as they attempted to corral rambunctious students in virtual classrooms.

See all our coverage of the coronavirus outbreak

In the end, every student had their own personal pandemic experience. “You can’t generalize,” says Pedro Noguera. He’s dean of the education school at the University of Southern California in Los Angeles. Half of U.S. students went to in-person school by the end of 2020, either full-time or on a hybrid schedule. Some others instead had private teachers and learning bubbles. Still more muddled along on their own. Some lacked solid internet access or even a quiet place to sit.

Schools have long served as a safety net for kids. Now many students went without consistent meals and regular check-ins with adults. School counselors had hard times reaching students. Globally, more than 1.5 million kids lost a parent, live-in grandparent or other live-in relative to COVID-19. Scientists reported that estimate July 31 in the Lancet.

But these pandemic losses were not spread evenly. Children from Black and Hispanic communities and other traditionally underserved groups tended to suffer most.

New data are starting to point out the scope of such impacts as schools restart. Adults must understand the challenges in helping kids come back to the classroom and, ultimately, thrive, says Kathleen Ethier. She is a social and behavioral scientist. She works at the U.S. Centers for Disease Control and Prevention in Atlanta, Ga. She sees one potential positive take-home messages from this past year and a half. After all kids have gone through, she says, “we understand now just how important school is.”

It’s hard to measure academic performance in a way that applies to all. But early in the pandemic, test scores for U.S. students hinted of educational blows that were on their way.

One analysis looked changes in test scores from one fall to the next winter among kids in California. Compared with previous years, the changes from fall of 2019 to the winter of 2020 showed an overall drop. “On average, kids are two to two-and-a-half months behind where we would expect they would have been if COVID hadn’t happened,” says Libby Pier. She’s a learning science expert who coauthored the June 2021 report. She works for Education Analytics, a nonprofit based in Madison, Wisc. A normal school year is nine months long. So that drop in learning, she says, suggests it’s “a quarter to a third of the school year they missed out on.” 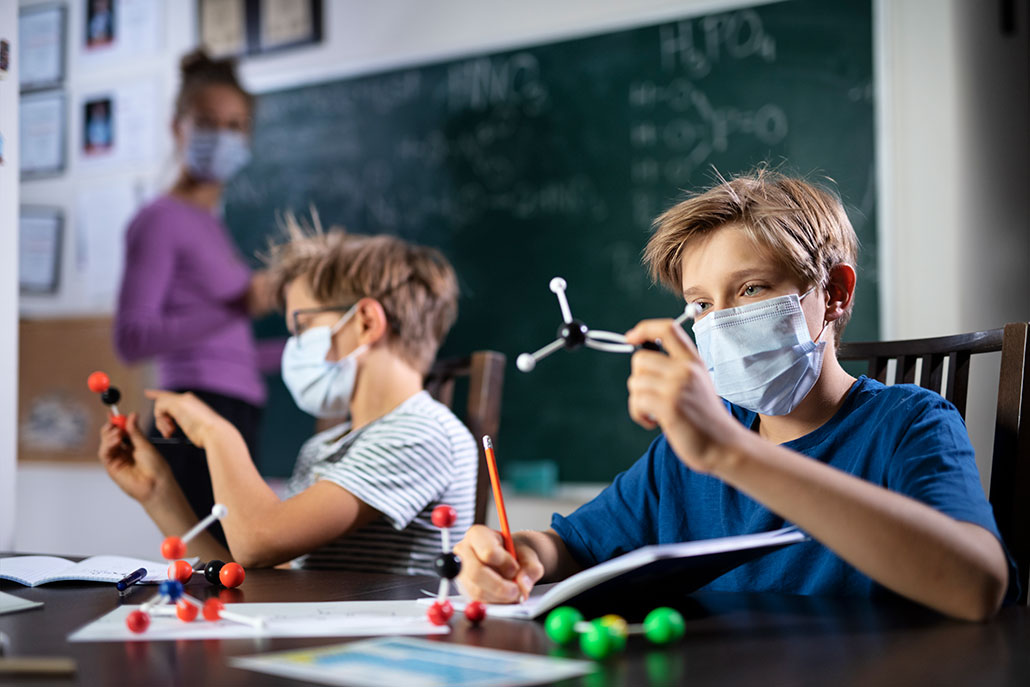 Even students who were comfortable working from home may have lacked access to important school resources — from libraries to classroom supplies for hands-on-learning. Imgorthand/E+/Getty Images Plus

Of course, the pandemic didn’t end in 2020. So kids likely fell behind even more as time went on.

One survey of U.S. elementary school students found they finished the 2020–2021 school year really far behind. Kids ended the year an average of five months behind in math. They averaged a four-month lag in reading. And those numbers, don’t reflect all students. This July 27 report tallied tests scores only from kids who were in schools. Those studying from home could have fared even worse.

This learning lag was greatest for kids in underserved communities. Many of these students are Hispanic, Black, economically disadvantaged or learning English. Students in white-majority schools lost four months of math and three months of reading. Those in majority-Black schools ended the year six months behind where they should have been in both reading and math.

Academic performance based on school demographics

“Right now, we don’t have the evidence to conclude whether the impacts we are seeing are because students were learning remotely, or because there was a global pandemic,” Pier says. Kids could have also been struggling with losing a parent. Maybe they were caring for siblings or had no reliable internet connection. Researchers need more detail about kids’ lives and schooling. Until then, she says, “we can’t answer the questions we want.”

One big question is how virtual classes stack up against in-person ones. The CDC’s Ethier was part of a team that tackled this question in the fall of 2020. They surveyed 1,290 parents of 5- to 12-year-olds. Their questions asked about the type of schooling their children had and about the well-being of these families.

On 11 of 17 measures, families with kids who were doing partial or full-time virtual school fared worse than students attending in person full-time. Kids in virtual school got less exercise and spent less time outdoors. They also spent less time in person with friends. The parents of kids in virtual school also were worse off. They reported mental distress, trouble sleeping and more. “Both in terms of stress that families feel, and outcomes among children, there really were significant differences” between in-person and virtual learning, Ethier says.

The survey “gives us some clues about who to watch out for and what to watch out for,” she says. The team shared its findings March 19 in Morbidity and Mortality Weekly Report.

Families of color were more likely to have a student in virtual school than were white families, the survey found. Similar trends emerged in a study of New York schools. Ashley Fox is a health policy researcher at the University at Albany in New York. Her team found big differences in who could go to school and who had to stay home. About one in every six elementary students in the state had access to in-person learning. But looking at the data by kids’ race turned up stark differences. Almost one in every three white students (30 percent) could attend in-person school. Only one in every 20 Black students could. Fox’s team described its data July 15 in JAMA Network Open.

Race wasn’t the only factor, Fox and her team found. More advantaged students, such as white, suburban middle-class kids, had much more access to in-person school than other groups. Those other groups included students from urban areas, low-income families, students with disabilities and students experiencing homelessness.

Even before the pandemic, different schools often provided different opportunities to learn. And what those opportunities were often depended on where a student lived. Fox’s new tally of which schools stayed open shows that the pandemic made those inequities worse. One thing many kids missed during long stretches of remote learning was the chance to spend time with friends and classmates. Viktorcvetkovic/ E+/Getty Images PlusAn emotional toll

These academic inequities are not surprising, says Noguera. “The real issue now is what we do about it.” It would be a mistake, he says, “to focus narrowly on [learning] and ignore some of the mental-health challenges that kids will be bringing back with them.”

Depression and anxiety are rising among children and teens. One place that shows up is in emergency rooms. Scientists tallied visits for mental-health issues from April to December of 2019. They compared those against the same months in 2020. Visits by 12- to 17-year olds rose by about 30 percent in 2020. For every 100,000 visits in 2019, 3,098 were related to mental health. In 2020, it rose to 4,051 out of every 100,000 emergency visits. The team reported these trends last November 13 in Morbidity and Mortality Weekly Report.

Data from February and March of 2021 show more worrying trends. These months saw an average of 855 emergency department visits a week for suspected suicide attempts among 12- to 17-year-old girls. That’s a jump of some 50 percent over the same winter weeks in 2019. Scientists reported this June 18 in Morbidity and Mortality Weekly Report.

These studies weren’t designed to look at what’s causing this rise in emotional distress. But hints come from surveys of families, such as Ethier’s. Parents were more likely to report their kids in virtual classes had worse mental or emotional health when compared to students attending in-person classes.

Interrupted schooling may cast long shadows, says Dimitri Christakis. He’s a pediatrician at Seattle Children’s Research Institute in Washington. Earlier studies have linked years of schooling with someone’s success as an adult. That includes future health, earnings potential and even how long they live. Losing out on school is a big deal, says Christakis. “Children’s lives, their longevity, their health, will be impacted,” he says. “Not in the short term, necessarily, but over their lifespan.”

Students will return to classes this year carrying a range of burdens. Teachers and parents should realize that they won’t just have to do with what was — or was not — learned. This year’s return to school should be viewed “as an opportunity to do things differently,” Noguera says. “To not just to go back to the way it was. But to really try to make schools much more responsive to the needs of kids.”

If you or someone you know is suffering from suicidal thoughts, please seek help. In the United States, you can call the National Suicide Prevention Lifeline, 1-800-273-TALK (8255).

This article comes from the Internet and does not representwhats my zodiak signPosition, please indicate the source for reprinting：http://www.myaroo.com/15/1108.html
4like
Label:2018 gemini horoscope

Half the Time, Psychology Results Not Reproducible: Studyjune horoscope aquarius