ABOVE: MODIFIED FROM © ISTOCK.COM, FEODORA CHIOSEA

Kent Kiehl and his research team regularly park their long, white trailer just outside the doors of maximum-security prisons across the US. Inside the vehicle sits the bulky body of a mobile MRI machine. During each visit, people from the prison make their way to and from the vehicle in hourly shifts to have their brains scanned and help to answer an age-old question: What makes a murderer?

“It’s not an uncommon thing for [incarcerated people], while they’re getting a scan, to be like, ‘I’ve always been different. Can you tell me why I’ve always been so different?’” says Kiehl, a neuroscientist at the University of New Mexico and the Albuquerque-based nonprofit Mind Research Network (MRN) who helped design the mobile MRI system back in the early 2000s.

SCAN-MOBILE: Kiehl and his colleagues made more than 75 modifications to a trailer and the MRI system inside to outfit both for the team’s unique research.KENT KIEHL

The author of The Psychopath Whisperer: The Science of Those Without a Conscience, Kiehl has been fascinated by the criminal mind since he was an undergraduate at the University of California, Davis. Now, as director of mobile imaging at MRN, he oversees efforts to gather brain scans from thousands of people held in US prisons to learn what features, if any, might differ from scans of the general population.

This massive dataset recently allowed Kiehl to examine the brain structures of more than 800 men held in state prisons in New Mexico and Wisconsin in an attempt to distinguish incarcerated people who have committed homicide from those who have committed other crimes.

First, Kiehl and his colleagues laboriously sorted the pool of people who had volunteered for the study into three categories based on their crimes: homicide, violent offenses that were not homicide, or non-violent or minimally violent transgressions. The team relied on official convictions, self-reported homicides, and confidential interviews with participants to determine who attempted or committed murder—both offenses that got a “homicide” label in their dataset.

People charged with felony murder—meaning that they had committed a serious felony that was in some way connected to a person’s death, even though they hadn’t intended to kill the victim—and people whose cases indicated considerable doubt about a judgment of homicide were not counted among murderers. And occasionally, people were moved from another category into the homicide group, Kiehl says. The researchers excluded people with abnormal radiology reports, traumatic brain injury, or diagnosed psychotic disorders from the study.

Controlling for substance use severity, time in prison, age, and IQ, the team analyzed the MRI data to look for differences among the study participants. Compared with the other two groups, the 200 men who had committed homicide showed significantly reduced gray matterin several brain regions that play important roles in behavioral control and social cognition.

“I think that the intriguing thing was, first, that they found a difference,” says Hannes Vogel, a neuropathologist at Stanford University Medical Center who was not involved in the work. “And second of all, that it correlates with some of the brain centers that deal with behavior and social interaction.”

Lora Cope, a neuroscientist who studies substance disorders at the University of Michigan, notes in an email to The Scientistthat the team’s mobile MRI system has now been used in correctional facilities all over New Mexico and Wisconsin, and “has really revolutionized this area of research.” Indeed, the MRN has now used the equipment to collect roughly 6,500 scans from more than 3,000 research participants since its first outing in 2007.

Although Cope wasn’t involved in the current project, she worked with Kiehl a few years ago while earning her doctorate at the University of New Mexico. After speaking with members of the Avielle Foundation, named for a six-year-old victim of the 2012 Sandy Hook Elementary School shooting, the two researchers spearheaded a study of more than 150 incarcerated young males, 20 of whom had been convicted of homicide, held at a maximum-security detention facility within the state. “Jeremy, [Avielle’s] father, really wanted to know if there was anything neuroscience could tell us about boys who commit homicide,” says Kiehl.

As in the current study, Cope and Kiehl deployed the mobile scanner to collect MRI scans of the incarcerated teens in New Mexico and discovered differences between those who had committed homicide and their imprisoned peers. The homicide offenders “had significantly less gray matter volume in parts of their temporal lobes,” Cope says. When Kiel compared the data from that study with the results of his latest project, he found a high degree of overlap. “Lo and behold . . . we found and replicated every region that was different in the boys and was different in the adult males, and in the same way,” he says.

The latest study’s finding that MRI data can distinguish homicide offenders not only from people who committed non-violent crimes, but also from those who performed other violent crimes, is particularly interesting, says Harold Koenigsberg, a psychiatrist at Icahn School of Medicine at Mount Sinai. “I would have thought there would be more of an overlap between [homicide and violent non-homicide offenders],” he says. “I’m surprised that it was so specific to homicide.” 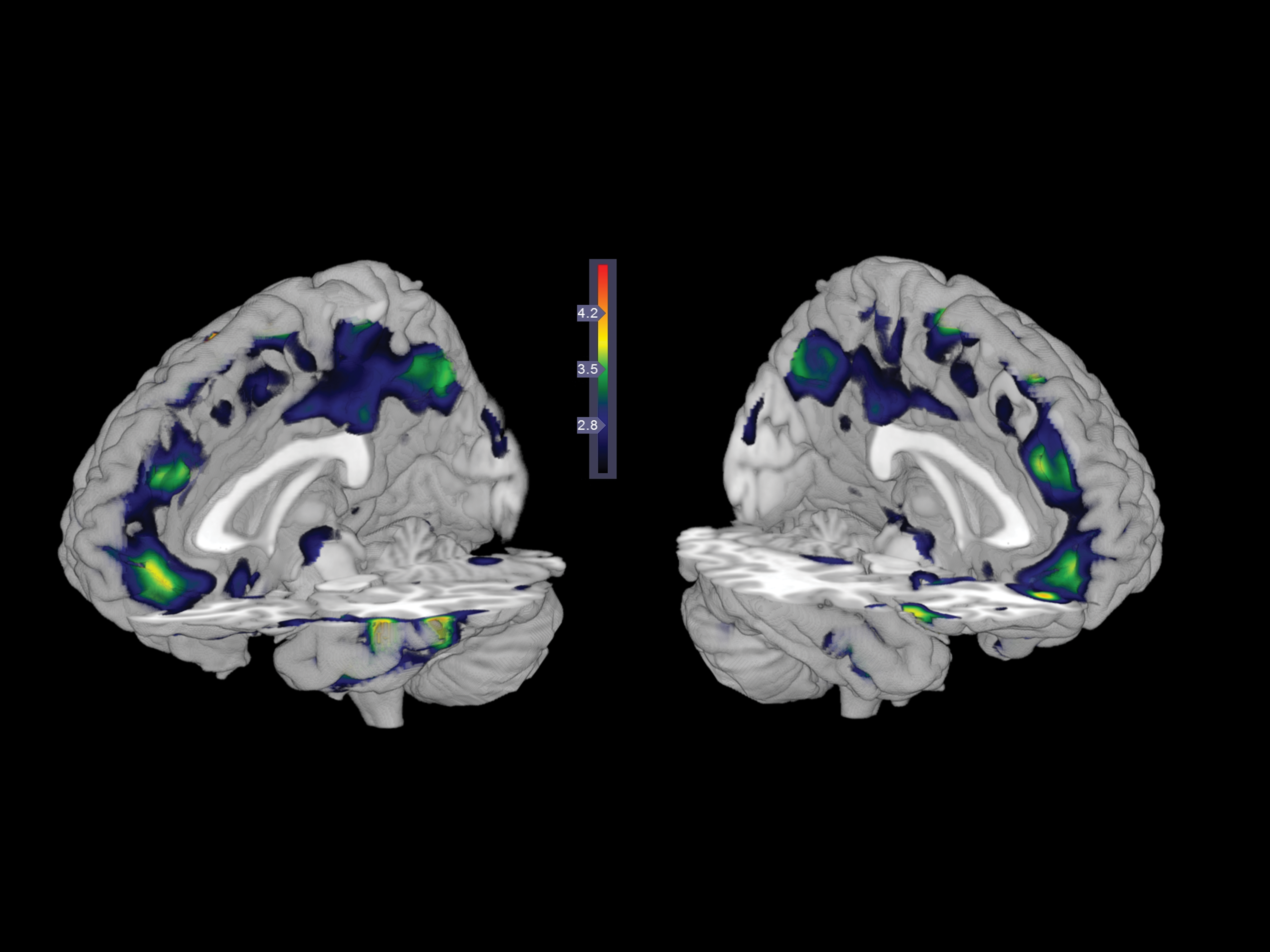 ANATOMY OF A MURDERER: Homicide offenders exhibited reduced gray matter density compared with other violent offenders in the regions of the brain highlighted blue and green above.A. SAJOUS-TURNER ET AL. (2019)

Koenigsberg notes that homicidal violence can itself be split into two categories: impulsive and instrumental. Impulsive violence is born of unbridled emotions and overblown reactions, a brand of behavior linked to poor frontal lobe functioning and abnormal serotonin levels. Instrumental violence, on the other hand, is premeditated and is associated with other brain changes, such as reduced amygdala activation during emotion processing. “These two groups, we think that they have different biologies,” says Koenigsberg. Kiehl’s dataset could be enriched by adding measures of neurotransmitter release and electrical activity, along with related behavioral assessments, he suggests, and with both functional and structural data, psychologists might learn more about what gives rise to these distinct behavioral phenotypes.

Koenigsberg, Vogel, and Kiehl all note that the structural data collected in the current study cannot on its own be used to predict who has committed homicide, let alone who might in the future. Nonetheless, the paper may find its way into the courtroom, says Vogel. If lawyers felt so inclined, they could try to “find an expert on one side who will quote this [paper]” in defense of someone who has committed a homicide, by arguing a client’s actions were due to brain abnormalities and thus out of his or her control. Or, a prosecutor could potentially use the paper to argue that MRI findings should be admissible as evidence that a defendant has committed a homicide, says Vogel, who has served as a consultant for court cases in California and Nevada, and helped investigate the brain of the Route 91 Harvest music festival shooter in 2017. “But then you’re [also] going to find an expert that will tear that [testimony] to pieces.”

Kiehl notes that his MRI study could also someday contribute to new evidence-based measures of homicidal risk. These measures could supplement current measures of violent behavior, such as psychological questionnaires, if future studies demonstrated they carried predictive weight, he says. Beyond courts of law, he also suggests that understanding how violent behavior arises could pave the way to better psychological treatment aimed at both rehabilitation and prevention.

This article comes from the Internet and does not representwhats my zodiak signPosition, please indicate the source for reprinting：http://www.myaroo.com/15/1103.html
4like
Label:what zodiac sign is august 24th