Children born to mothers who are depressed during and after pregnancy are more likely to develop depressive symptoms themselves by the age of 24, according to new research led by the University of Bristol.

By the age of 24, young people born to mothers with antenatal and postnatal depression, had depression scores that were almost three points higher than offspring of mothers with no depression. The study also considered the impact of the father’s depression, although the sample was very small.

Published today in the British Journal of Psychiatry, the study looked at survey information for 5,029 individuals during a 14-year period from the ages of 10 to 24 to examine how risks of depression occur across childhood and adolescence.

Thanks to data from world-renowned health study Children of the 90s (also known as the Avon Longitudinal Study of Parents and Children) researchers could explore the patterns of offspring depressive symptoms based on the various timings of maternal depression see if there were any characteristics or differences in when and for what duration the offspring of depressed mothers were depressed themselves.

Dr Rebecca Pearson, senior author and senior lecturer in psychiatric epidemiology at the University of Bristol / Professor of Psychology at Manchester Metropolitan University, said: “By tracking trajectories of repeated measures of mood in offspring of depressed mothers, from childhood through to adulthood, we were able to provide further insight into how the well-known intergenerational risk of depressed mood presents over time.”

Dr Priya Rajyaguru, first author explained: “This study shows that the children of parents with both antenatal and postnatal depression are at greatest risk of depression themselves, and this risk appears to persist throughout adolescence into early adulthood. We also found some differences according to the timing of maternal depression in particular”. 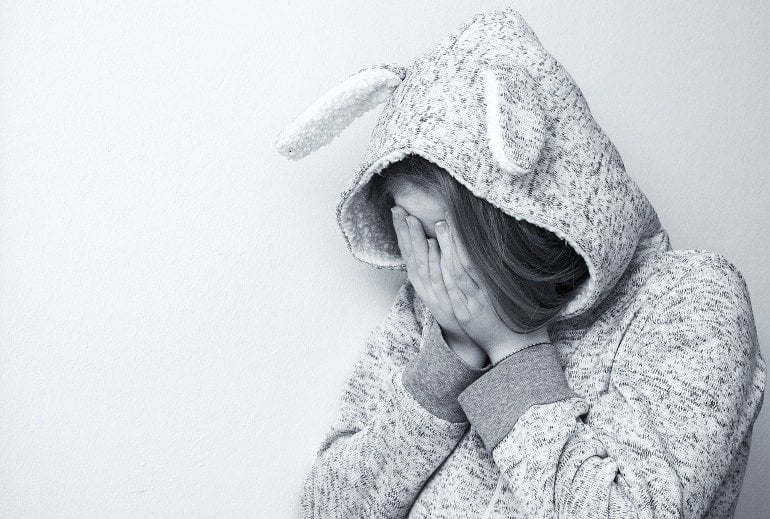 By the age of 24, young people born to mothers with antenatal and postnatal depression, had depression scores that were almost three points higher than offspring of mothers with no depression. Image is in the public domain

The data was collected from a cohort that is predominately white and middle class. Further work is needed to look at more populations and contexts such as parenting styles, peer relations and other factors across different cultures.

The research was supported by expertise from Manchester Metropolitan University.

Dr Joanne Black, Chair of the Faculty of Perinatal Psychiatry at the Royal College of Psychiatrists, said: “Thisresearch looks atthe impact of depression in both mothers and fathers on their children’s risk of depression.It showsthat the timing of depression in parents (during pregnancy, after childbirth or both) and if the mother, father or both were affectedareallimportant risk factors for the child’s future mental health.“The good news is that we have effective evidence-based treatments and the earlier we can provide these, the better. That’s why mental health screening for all mothers is vital and will continue to be a priority as we emerge from the pandemic.

“The study also raises important questions about the visibility of paternal mental health, although the sample of fathers was small. As their mental health is not routinely screened but still affects the child’s future mental health, we need more research to understand what better support for fathers might look like.”

This article comes from the Internet and does not representwhats my zodiak signPosition, please indicate the source for reprinting：http://www.myaroo.com/13/1055.html
6like
Label:virgo love august 2020

What causes ADHD and can it becured?scorpio horoscope for the week