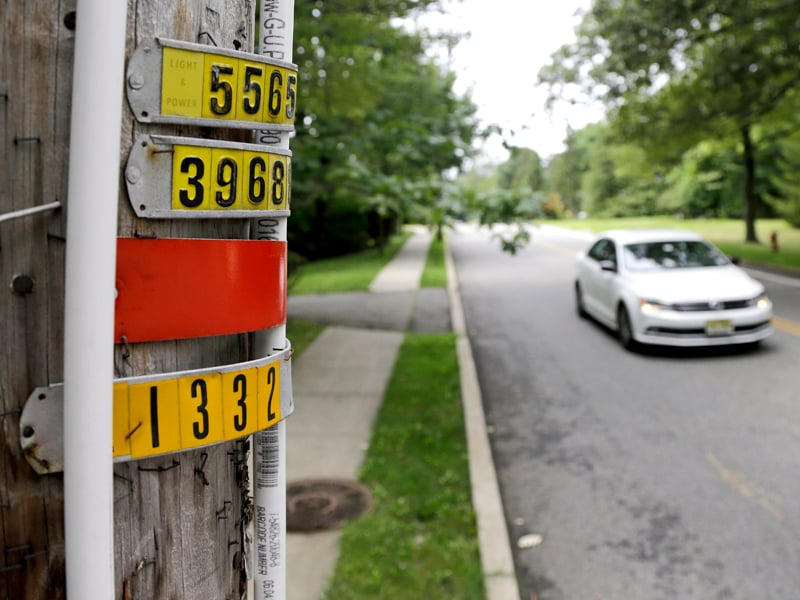 In this Aug. 5, 2017, file photo, in Mahwah, N.J., a vehicle drives past red piping attached to a utility pole, signifying an outdoor area known as an eruv used by Orthodox Jews to mark areas where they are permitted to carry items while observing Sabbath rules against work. The Mahwah town council tried to ban eruvs and to limit a public park to residents — keeping out chiefly Jewish neighbors from New York. (AP Photo/Julio Cortez, File) October 24, 2017 By Yonat Shimron ShareTweetShare

MAHWAH, N.J. (AP) — New Jersey sued one of its towns Tuesday over two recent ordinances the state says illegally targeted a Jewish community from nearby New York, likening the conduct of town officials to the “1950s-era white flight suburbanites” who sought to keep blacks out of their neighborhoods.

The lawsuit against Mahwah and its township council seeks to block the ordinances and seeks the return of more than $3.4 million in state grants the town has received from the state Department of Environmental Protection.

The state contends Mahwah violated New Jersey’s Green Acres Act by banning out-of-state residents from its parks. The state notes that land acquired under the law cannot be restricted on the basis of religion or residency.

One of the measures cited in the suit limits the use of a public park to state residents. The second effectively bans the building of an eruv, a religious boundary created by placing white plastic piping on utility poles.

“In addition to being on the wrong side of history, the conduct of Mahwah’s township council is legally wrong, and we intend to hold them accountable for it,” Attorney General Christopher Porrino said.

“To think that there are local governments here in New Jersey, in 2017, making laws on the basis of some archaic, fear-driven and discriminatory mindset, is deeply disappointing and shocking to many, but it is exactly what we are alleging in this case,” Porrino said. “Of course, in this case we allege the target of the small-minded bias is not African-Americans, but Orthodox Jews. Nonetheless, the hateful message is the same.”

The park ban was created in July after residents complained about overcrowding at parks and their use by Orthodox Jewish families from New York. Mahwah Police Chief James Batelli raised concerns at the time that the ban was illegal, and Bergen County Prosecutor Gurbir Grewal advised police not to enforce it.

The Bergen Rockland Eruv Association and two New York residents filed a federal lawsuit in August alleging the town was violating their constitutional and civil rights with its ban on their religious boundary.

Some Orthodox Jews consider the boundary necessary to allow them to do such activities as carrying keys and pushing strollers on the Sabbath. Mahwah officials, though, said the markers violate local laws that prohibit signs on trees, rocks and utility poles.

Bill Laforet, Mahwah’s independent mayor, said he had “repeatedly warned” council members about the consequences they and the town could face and reminded them of the police chief’s concern. He said he also voiced concern about the “severe potential financial penalties” taxpayers could face.

Laforet said he’s “sorrowed by the loss of reputation for Mahwah,” which he described as a diverse, tolerant and welcoming community.

He puts much of the blame on City Council President Rob Hermansen. “His race-baiting bantering has now bitten him back,” Laforet said.

Hermansen said the prosecutor’s office and the attorney general’s office both rejected requests to help town officials create laws that would be neutral and could be enforced.

“It’s astonishing to know that we told them what we were looking to do and they rebuked us, and we’re now being sued over this,” he said.

Hermansen said the ordinance was written by the township attorney, not the council, and under those circumstances “we deem it to be good law when we receive it.”

He also disputed Laforet’s remarks about him and how the measures were handled, saying “the mayor has an issue with telling the truth.” He also said he was “getting tired of the mayor slandering me and my family. His attacks need to stop.”

A town spokeswoman said Mahwah would not be commenting on the suit on the advice of its attorney.

Hermansen, who has condemned anti-Semitic comments people have made about the Jewish community in some online postings, has said the ban was not created to be discriminatory. He noted that Mahwah residents began complaining this year about vehicles from New York occupying parking lots at Winters Pond, a recreational area across from the town’s train station.

The ordinance, he has said, was intended to curb the number of people from outside Mahwah using parks, not to target Jews.

“We had incidents where Mahwah families could not use the parks,” he said last month, so the council wanted to find a way to “put Mahwah residents first.”

This article comes from the Internet and does not representwhats my zodiak signPosition, please indicate the source for reprinting：http://www.myaroo.com/12/943.html
6like
Label:leo april 2017 horoscope

Can empathy be learned? Science offers some cluesaugust 28 horoscope 2021