A quick guide to climate change jargon – what experts mean by mitigation, carbon neutral and 6 other

A quick guide to climate change jargon – what experts mean by mitigation, carbon neutral and 6 other keytermsseptember horoscope 2021 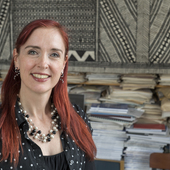 Wändi Bruine de Bruin has received support from the University of Southern California Dornsife College Public Exchange and the Center for Climate and Energy Decision Making (CEDM) through a cooperative agreement between the National Science Foundation and Carnegie Mellon University. This project is a collaboration between the University of Southern California and the United Nations Foundation.

USC Dornsife College of Letters, Arts and Sciences and University of Southern California provide funding as members of The Conversation US.

When scientists and policy writers talk about climate change, a lot of technical terms get tossed around: adaptation, carbon neutral, sustainable development. The language can feel overwhelming.

“It sounds like you’re talking over people,” one person said of the terminology during a recent study colleagues and I conducted through the USC Dornsife Public Exchange.

Authoritative reports about climate change can be difficult for nonscientists to understand. With the Intergovernmental Panel on Climate Change releasing new reports on mitigation and adaptation, we thought it would be helpful to clarify some of the most common terms used to describe climate change.

We interviewed 20 people about common terms used by climate scientists and climate journalists. We then used their feedback to explain those terms in everyday language. With the help of the United Nations Foundation, we chose eight terms from reports written by the Intergovernmental Panel on Climate Change.

Here’s a guide that may help you to follow the news about climate change. The explanation of each term starts with the technical definition from the IPCC. The text that follows puts it into plain language.

IPCC definition: Mitigation (of climate change): a human intervention to reduce emissions or enhance the sinks of greenhouse gases.

When people talk about “mitigation” they often focus on fossil fuels – coal, oil and natural gas – used to make electricity and run cars, buses and planes. Fossil fuels produce greenhouse gases, including carbon dioxide. When these gases are released, they linger in the atmosphere. They then trap heat and warm the planet.

Some ways to mitigate climate change include using solar and wind power instead of coal-fired power plants; making buildings, appliances and vehicles more energy efficient so they use less electricity and fuel; and designing cities so people have to drive less. Protecting forests and planting trees also help because trees absorb greenhouse gases from the atmosphere and lock them away. 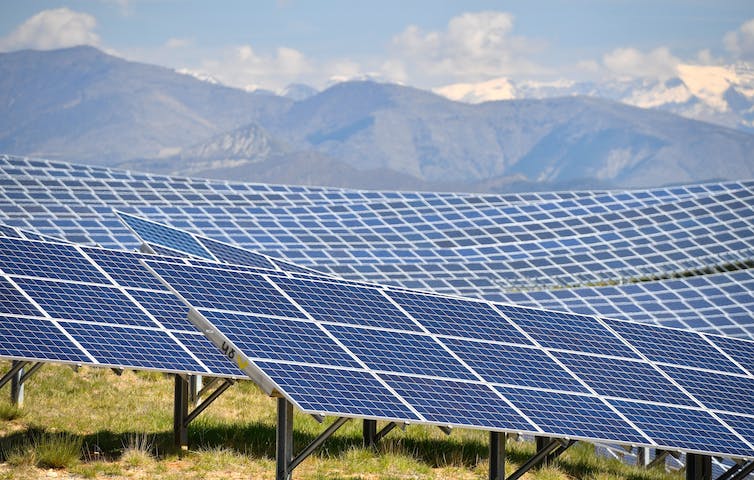 Use of solar power as an alternative to fossil fuels is growing. Gerard Julien/AFP via Getty Images 2. Adaptation

Translation: Making changes to live with the impacts of climate change.

Climate change is already happening. Heat waves, wildfires and floods are getting worse. People will have to find ways to live with these threats. Los Angeles, for example, is planting trees to help people stay cooler. Coastal cities like Miami may need sea walls to protect against floods. More “adaptation” actions will be needed as climate change gets worse.

IPCC definition: Carbon dioxide removal methods refer to processes that remove CO2 from the atmosphere by either increasing biological sinks of CO2 or using chemical processes to directly bind CO2. CDR is classified as a special type of mitigation.

Translation: Taking carbon dioxide out of the air.

The amount of carbon dioxide in the air has been increasing for many years. In 2019, there was 50% more more of it than in the late 1700s. Planting trees and restoring grasslands can remove carbon dioxide from the air. There are also carbon dioxide removal technologies that store it underground or in concrete, but these are new and not widely used. 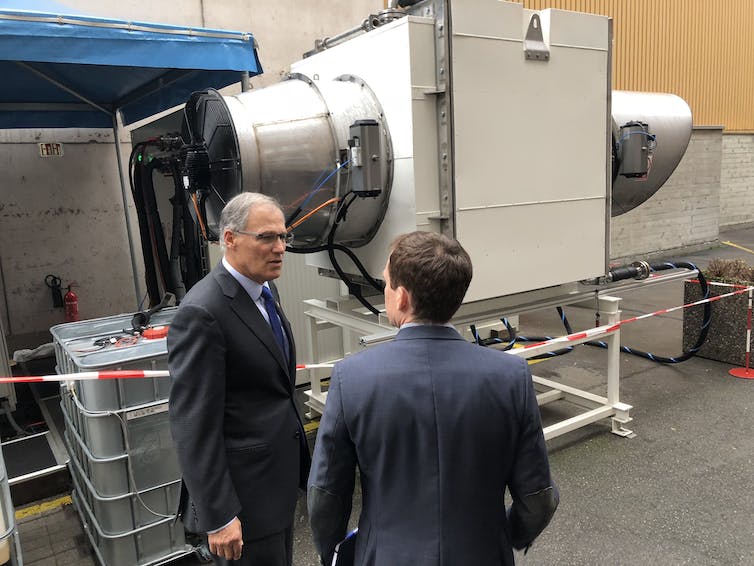 The IPCC warns that the world needs to be carbon neutral by 2050 to avoid a serious climate crisis. This means using both “mitigation” to reduce the amount of carbon dioxide added to the air and “carbon dioxide removal” to take carbon dioxide out of the air.

IPCC definition: A level of change in system properties beyond which a system reorganizes, often abruptly, and does not return to the initial state even if the drivers of the change are abated. For the climate system, it refers to a critical threshold when global or regional climate changes from one stable state to another stable state.

Translation: When it is too late to stop effects of climate change.

One of the most talked-about tipping points involves the collapse of the West Antarctic ice sheet. Some research suggests it may have already started happening. West Antarctica alone holds enough ice to raise sea levels worldwide by about 11 feet (3.3 meters). If all glaciers and ice caps melt, sea levels will end up rising about 230 feet (70 meters).

Why the West Antarctic ice sheet may have passed a tipping point. 6. Unprecedented transition

IPCC definition for “transition”: The process of changing from one state or condition to another in a given period of time. Transition can be in individuals, firms, cities, regions and nations and can be based on incremental or transformative change.

Translation: Making big changes together to stop climate change – in a way that has not been seen before.

In 2015, countries around the world agreed to try to keep the planet from warming more than 1.5 degrees Celsius (2.7 F). Among the biggest sources of global warming are coal-fired power plants. Quickly shifting the world to renewable energy, such as wind and solar power, would be an unprecedented transition. Without big changes, climate change could make the world unlivable.

IPCC definition: Development that meets the needs of the present without compromising the ability of future generations to meet their own needs and balances social, economic and environmental concerns.

Translation: Living in a way that is good for people alive today and for people in the future.

Levels of carbon dioxide in the air have risen quickly over the past 70 years. NOAA 8. Abrupt change

IPCC definition: Abrupt climate change refers to a large-scale change in the climate system that takes place over a few decades or less, persists (or is anticipated to persist) for at least a few decades and causes substantial disruptions in human and natural systems.

Translation: A change in climate that happens much faster than it normally would.

[Over 140,000 readers rely on The Conversation’s newsletters to understand the world. Sign up today.]

Our world is changing quickly as a result of climate change. Wildfires are raging in parts of the Western U.S. that were once too wet to burn. Coral reefs are dying as the ocean is getting warmer. These changes would not have happened so quickly – or at all – were it not for climate change.

Lance Ignon, a former communications adviser for the IPCC and now senior associate dean for strategic initiatives and communication at USC Dornsife and a co-author of the paper with Wändi Bruine de Bruin, Lila Rabinovich, Kate Weber Marianna Babboni and Monica Dean, contributed to this article.

september horoscope 2021A quick guide to climate change jargon – what experts mean by mitigation, carbon neutral and 6 other keyterms

This article comes from the Internet and does not representwhats my zodiak signPosition, please indicate the source for reprinting：http://www.myaroo.com/12/938.html
2like
Label:september horoscope 2021

From Tarantino to Squid Game: why do so many people enjoyviolence?taurus november

Is the sky really blue? It depends on what language you speakwhat is april 23 zodiac sign