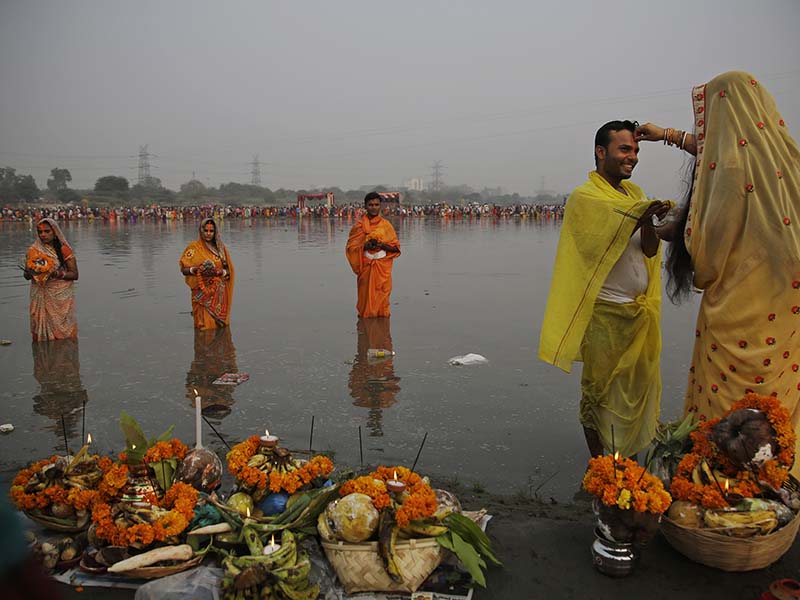 A Hindu devotee applies vermillion powder on the forehead of her husband as they perform rituals on the banks of the Yamuna River during Chhath Puja festival in New Delhi, India, Thursday, Oct. 26, 2017. During Chhath, an ancient Hindu festival, rituals are performed to thank the Sun god for sustaining life on earth. (AP Photo/Altaf Qadri) October 28, 2017 By Shane Epping ShareTweetShare

(RNS) — Each week Religion News Service presents a gallery of photos of religious practice around the world. This week, images focus on the Chhath Puja festival in India, a suicide attack in Afghanistan, Pope Francis’ talk with astronauts at the International Space Station, Rohingya Muslim children waiting for food in Bangladesh, the funeral of King Bhumibol Adulyadej in Thailand, and more.

A Hindu devotee applies vermilion powder on the forehead of her husband as they perform rituals on the banks of the Yamuna River during the Chhath Puja festival in New Delhi on Oct. 26, 2017. During Chhath, an ancient Hindu festival, rituals are performed to thank the sun god for sustaining life on Earth. (AP Photo/Altaf Qadri)

An Afghan man inspects inside a damaged mosque in Kabul, Afghanistan, on Oct. 21, 2017, a day after a suicide attack. Suicide bombers struck two mosques in Afghanistan during Friday prayers — the Shiite mosque in Kabul and a Sunni mosque in western Ghor province — at the end of a particularly deadly week for the troubled nation. (AP Photo/Rahmat Gul)

Pope Francis speaks to the crew aboard the International Space Station from the Vatican on Oct. 26, 2017.  Francis’ hookup Thursday marked the second papal phone call to space: Pope Benedict XVI rang the space station in 2011 and peppered its residents with questions about the future of the planet and the environmental risks it faced. (L’Osservatore Romano/Pool Photo via AP)

Rohingya Muslim children, who crossed over from Myanmar into Bangladesh, wait squashed together to receive food handouts distributed to children and women by a Turkish aid agency at Thaingkhali refugee camp, Bangladesh, on Oct. 21, 2017. UNICEF says the children who make up most of the nearly 600,000 Rohingya Muslims who have fled violence in Myanmar are seeing a “hell on earth” in overcrowded, muddy and squalid refugee camps in neighboring Bangladesh. Children account for 58 percent of the refugees who have poured into Cox’s Bazar, Bangladesh, over the last eight weeks. (AP Photo/Dar Yasin)

Ultra-Orthodox Jewish youths scuffle with Israeli police officers Oct. 23, 2017, at the entrance to Jerusalem during a protest against enlistment in the army. (AP Photo/Sebastian Scheiner)

In this Oct. 23, 2017, file photo, a Rohingya Muslim boy who crossed over from Myanmar into Bangladesh carries bamboo given to him for construction of shelter at Kutupalong refugee camp in Bangladesh. U.S. officials are preparing a recommendation for Secretary of State Rex Tillerson to declare that ethnic cleansing is occurring against Myanmar’s Rohingya Muslims. That assessment would raise pressure on the Trump administration and American lawmakers to consider new sanctions on a country that had been lauded for its democratic transition. (AP Photo/Dar Yasin, File)

An Afghan refugee child wears a cap with the writing “God has willed” while waiting to be registered with her family members in Peshawar, Pakistan, on Oct. 25, 2017. (AP Photo/Muhammad Sajjad)

The head of the Russian Orthodox Church, Patriarch Kirill, speaks at the Romanian patriarchal cathedral in Bucharest, Romania, on Oct. 26, 2017. Kirill’s visit to Romania is the first by the head of the powerful Russian church since Communist rule there ended. (AP Photo/Andreea Alexandru)

The ceremonial urn of Thailand’s late King Bhumibol Adulyadej arrives during the funeral procession as the royal crematorium is seen in the background in Bangkok on Oct. 26, 2017. Tearful Thais clad in black mourned on Bangkok’s streets or at viewing areas around the nation Thursday as elaborate funeral ceremonies steeped in centuries of royal tradition were held for King Bhumibol Adulyadej after a year of mourning. (AP Photo/Wason Wanichakorn)

Pope Francis delivers his blessing as colored balloons fly during the Angelus noon prayer in St. Peter’s Square at the Vatican on Oct. 22, 2017. (AP Photo/Alessandra Tarantino)

This article comes from the Internet and does not representwhats my zodiak signPosition, please indicate the source for reprinting：http://www.myaroo.com/11/891.html
3like
Label:2021 horoscope april 27