Religious believers who embrace accountability to God (or another transcendent guide for life) experience higher levels of three of the four variables of psychological well-being – mattering to others, dignity and meaning in their lives, though not happiness – according to a study from researchers with Baylor University, Westmont College and Hope College.

The study also found that this relationship is stronger among those who pray more often, suggesting that accountability coupled with communication may be a powerful combination for well-being.

The study, Perceptions of Accountability to God and Psychological Well-Being Among US Adults, appears in Journal of Religion and Health and relies on data from the 2017 Baylor Religion Survey, a national survey of American religious beliefs, values and behaviors.

“A good deal of research examines how aspects of religious life such as church attendance, prayer and meditation are associated with psychological well-being, but no one has examined how feelings of accountability to God might play a role,” said lead author Matt Bradshaw, Ph.D., research professor of sociology at Baylor University’s Institute for Studies of Religion (ISR).

The study focuses on what the authors calltheistic accountability. In this view, embracing accountability to God in a virtuous manner is distinct from mere conformity to the social norms of one’s religious group, the researchers wrote. Rather, people who welcome accountability to God seek to discern God’s will with wisdom in order to prosper and better understand their purpose in life.

“People who embrace theistic accountability see themselves as answerable to God,” said co-author Blake Victor Kent, Ph.D., assistant professor of sociology at Westmont College. “They welcome responsibilities that are associated with their faith and view accountability to God as a gift that helps them lead happy and successful lives. Accountability has been examined philosophically as a virtue relevant to the spiritual life, but until now no one had quantified it.”

The researchers used two items from the survey to assess accountability to God:

“I decide what to do without relying on God.” (Question was reverse coded in the analyses.)“I depend on God for help and guidance.”

“Why should we expect perceptions of accountability to God to be associated with well-being?” Bradshaw said. “It’s because humans are social creatures and our psychological health is bound up in positive and constructive relationships, not only with other people, but also with God.”

The study adds a new approach to a larger body of research in religion and health that has been building for several decades.

“So much of the research examines religious attendance,” Kent said, “and we certainly looked at that. But after confirming that church attendance was associated with our outcomes, we found that accountability to God helps explain a lot more of what is going on in that connection between religion and well-being.” 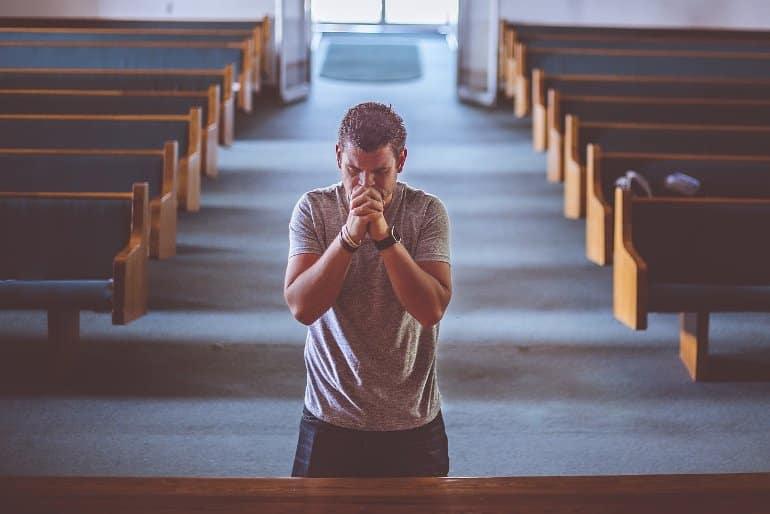 The study also found that this relationship is stronger among those who pray more often, suggesting that accountability coupled with communication may be a powerful combination for well-being. Image is in the public domain

For example, the researchers noted that the results for happiness were significant when they excluded other religious items from the analysis. This suggests that accountability matters but that it is also related to other facets of religious life such as the social aspects of attendance, which could matter more for happiness as part of a person’s psychological well-being.

“Further, it may be that happiness varies more on a daily basis compared with the other outcomes and may therefore be more strongly correlated with social and psychological factors that change quickly from day to day compared with relatively stable characteristics like accountability to God,” the researchers wrote.

The researchers plan to produce more work using the accountability to God framework, including the development of better ways to assess accountability, possibly providing a new avenue for understanding how religion and well-being can work hand in hand.

In other words, accountability in the religious realm may help people internalize and act upon their moral obligations under the loving hand of God to good effect, Johnson said.

Funding: The research was made possible through the support of a grant from the Templeton Religion Trust (#0171). The authors also thank Paul Froese, Ph.D., professor of sociology at Baylor and director of the Baylor Religion Surveys, for providing access to the data.

This article comes from the Internet and does not representwhats my zodiak signPosition, please indicate the source for reprinting：http://www.myaroo.com/09/788.html
3like
Label:horoscope august 4 2021

When missing children return: how can we avoid adding to Cleo Smith’strauma?june 27, 2021 horoscope