Courtney Alexander is creating the most beautiful tarot deck, filled with powerful Black characters and inspired by her heritage, her lived experience, and her intuition. Read an interview with Courtney here, and please support the deck on Kickstarter if you can!

A comics anthology about queer witches of colour, containing 15 original stories by a team of 17 women, demigirls, and bigender creators of color. Guys this looks beautiful and amazing! Preorder right over here, and read Mey’s interview with anthology editor Joamette Gill here on Autostraddle.

When you’re seeking out a new tarot deck, which cards are the deal-breakers for you? Most of us have one or two (or more) specific cards that affect our feelings about each deck, and possibly our decision whether or not it’s one for us.

It might be that you have a special relationship with a particular card, so if that one isn’t illustrated in a way that works for you, you’re going to struggle to really bond with the deck as a whole. Or it may be more political, so you need to see particular concepts or archetypes illustrated in a certain way in order to feel that a deck represents your world view (e.g. feminism, as we discussed in the last Fool’s Journey). 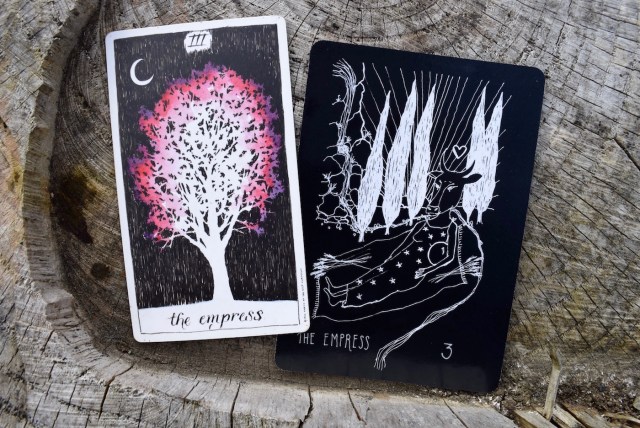 There are a number of cards I focus on when I’m looking at new decks, which I’ve listed below. This isn’t quite the same as listing my ‘favourite cards’ — many of these aren’t necessarily favourites, it’s just that the way they’re illustrated tells me a lot about the vision behind the deck. I’ve used the term ‘deal-breaker’ above, but that’s not really an accurate description. Like many folks, I’m on a continual search for the perfect tarot deck, and I don’t have it yet (though I feel like Noel Arthur Hiempel might possibly help out with that). This means with each deck I own, I’m making some kind of compromise.

I’d love to hear which specific cards you look to when you’re checking out new tarot decks! And what compromises have you found yourself making?

This one is so important. I read this card as a depiction of what true fulfilment looks like, what it feels like to ‘come home’, spiritually, emotionally. What it’s like to be happy with yourself, to give and receive love, to be happy in your heart and soul.

Sadly, so many artists place a picture of a (straight-looking) couple on this card, often with children and a house to complete the image of heteronormative perfection. Even Thea’s Tarot, which I adore, shows a (lesbian) couple with a baby. Yes, that’s emotional fulfilment to many, but by no means all people, and I feel like the over-use of couplehood on this card actually damages its message. 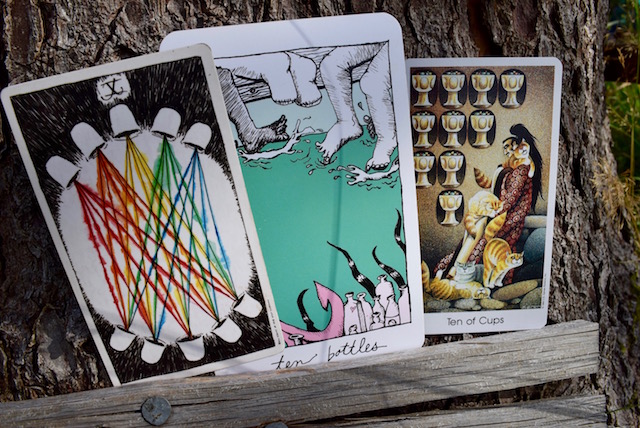 The Wild Unknown Tarot, the Collective Tarot, Tarot of the Cat People

My favourite Ten of Cups, hands down, is from the Wild Unknown Tarot. Here Kim Krans uses the rainbow motif that characterises the deck beautifully. Five cups at the top, each beaming out light of a different colour. Below, five more cups receive the light, a rainbow arriving in each. It suggests a movement from the compartmentalised to the integrated. A fearlessness of being completely myself. A love for all that I am.

(I also love the Tarot of the Cat People version, which is basically just a guy and his many cats. Home, indeed.)

Here’s a card that carries a heavy weight. As the penultimate card in the major arcana, this is about that last step before completion, the final challenge that you’re facing on your journey. It’s a big moment, in which you’re being encouraged to be accountable to yourself, to face up to all that you are, the good and the ‘bad’ together. The Christian overtones in some images are strong, which I find off-putting, not to mention the name of the card itself, which carries obviously negative overtones. 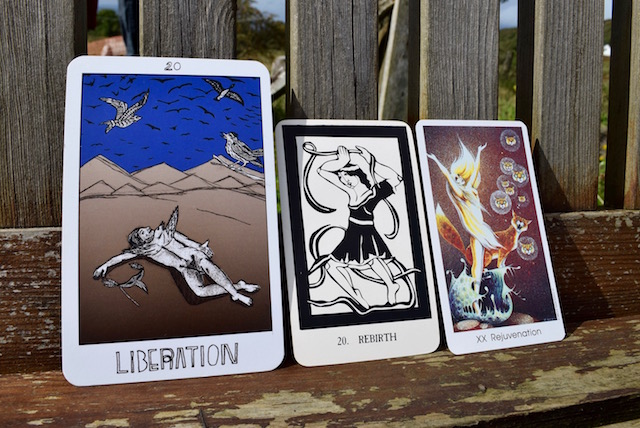 The Collective Tarot, Thea’s Tarot, Tarot of the Cat People

In some decks, this card is renamed. In the Collective Tarot it’s ‘Liberation’, which feels perfect to me. In Thea’s Tarot, it’s ‘Rebirth’. Both of these place the focus on the person receiving the reading, rather than some external force. ‘Judgement’ to me sounds like standing in front of some terrible pulpit being told who and what I am, hardly the kind of experience I fancy going through. Liberation and Rebirth on the other hand? I’m up for the hard work it takes to experience those things. I feel like I’m being put in charge of my own destiny.

I struggled with the Hierophant for years, largely because of the Pope-type figure that so often adorns this card. It felt like a card of doctrines, of strictures, of conforming to certain rules and beliefs (qualities I might better have attributed to the Emperor.) 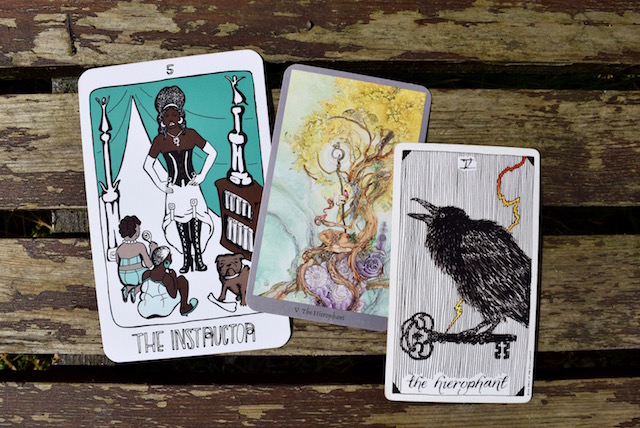 This changed when I saw Stephanie Piu-Mun Law’s version. In the Shadowscapes Tarot, the Hierophant is a tree (it feels a lot like one of the ents in Lord of the Rings) and I began to have a sense of the ancestral qualities of this card. There’s something here about receiving time-honoured knowledge from those who have been before (that can be spiritual leaders, sure, but also community heroes, activists, members of your own family, ancestors of identity or blood…) and I love to see decks that take that kind of knowledge out of church-y environments and revision teachers in different ways, like the raven in the Wild Unknown, or the awesome Instructor in the Collective Tarot.

Like about half the folks reading this, I’m a big fan of the Queen of Swords, and I pay close attention to the way they’re depicted. For me, this is a person who’s been through some stuff, who knows what heartbreak is, who understands boundaries and has a touch of cynicism about them. At the same time, they’re strong and humorous and someone you’d trust with your most difficult truths. 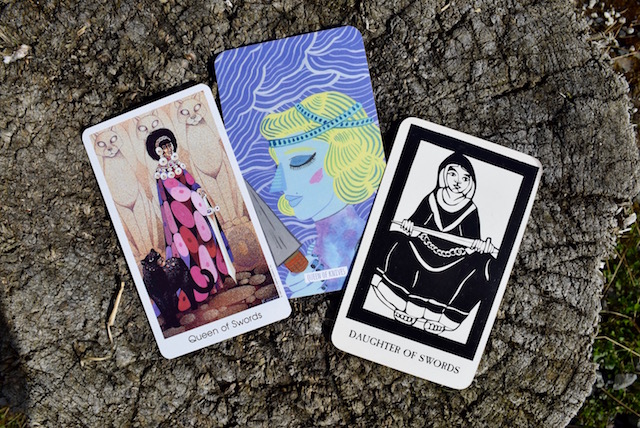 It’s hard to say exactly what I’m looking for in this card, but it’s a glimpse in the face or posture of these qualities. I want to see a Queen of Swords who embodies that ‘just you try it’ kind of composure, but who still has a glint in their eye. Someone strong and hard…but with just a hint of of the compassion that lies beneath. I think for me, Karen Kuykendall’s version, in the Tarot of the Cat People, does it best.

If I see one more pregnant earth-mama…! Show me Empresses that are connecting with nature, who know the meaning of self-care, who know how to listen to their bodies, who can see a version of ‘receptiveness’ beyond the womb-based kind, who grow stuff and feed people and who make beautiful spaces for themselves and others to come home to. When I think of the Empress figures in my life, I rarely imagine pregnant mothers. I think of folks whose groundedness and solid self-love have made me feel comfortable and safe, nurtured and loved. It’s not that a pregnant woman can’t embody this, it’s just that I love to see artists who have thought beyond this cliche.

I always check out the Empress card in a new deck to see how this important archetype is expressed. A favourite, again, is the Wild Unknown Tarot — no person, just a glowing tree beneath the moon. It’s a tree I want to hug, a place I’d like to make my home. And I love Casey Zabala’s interpretation in the newly-released Wanderer’s Tarot — the cow-headed person chilling out in the sunset references this card’s link with beauty-loving Taurus. (You can see a photo right up at the top of this article.)

How about you? Any specific cards that make or break a deck for you? Have you found a deck that ticks all of your key-card boxes? What’s the one card that never seems quite right?

This article comes from the Internet and does not representwhats my zodiak signPosition, please indicate the source for reprinting：http://www.myaroo.com/08/675.html
2like
Label:leo horoscope love match