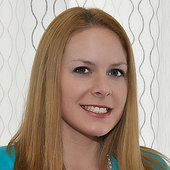 Ashley Gearhardt receives funding from the National Institute of Health and the American Heart Association.

University of Michigan provides funding as a founding partner of The Conversation US.

Every year millions of Americans try to cut down on ultra-processed foods – industrial formulations that are typically high in added fat, refined carbohydrates or both. Think industrially made cookies, cakes, potato chips and pizza.

For many, the desire to change what they eat is triggered by concerns about potentially life-threatening health conditions, like diabetes and heart disease. The impact of diet on health is not a small problem. In fact, a recent multidisciplinary commission of 37 leading scientists from around the globe identified unhealthy diets as a greater risk to human health than unsafe sex and alcohol, drug and tobacco use combined.

Many people know that most ultra-processed foods are not healthy. But the goal of cutting down on them can be so challenging that the majority of these attempts fail. Why?

In my Food and Addiction Science and Treatment Lab at the University of Michigan, my colleagues and I are investigating one largely overlooked factor: These ultra-processed foods may be addictive, sharing more in common with tobacco products than with whole foods like apples or beans.

I’m a clinical psychologist who studies addiction science, obesity and disordered eating. During my training at Yale University, it became clear to me that many people were showing classic signs of addiction in their relationship with ultra-processed foods – things like loss of control over consumption, intense cravings and an inability to cut down in the face of negative consequences.

So my colleagues and I created the Yale Food Addiction Scale. It’s a measure that applies the American Psychiatric Association criteria used to diagnose other addictive disorders to identify people who may be addicted to ultra-processed foods.

Based on our current estimates, 15% of Americans meet the threshold for food addiction, which is associated with diet-related disease, obesity and poorer quality of life. This prevalence is remarkably in line with that of addictions to other legal and accessible substances. For instance, 14% of people in the U.S. meet the criteria to be diagnosed with alcohol use disorders. 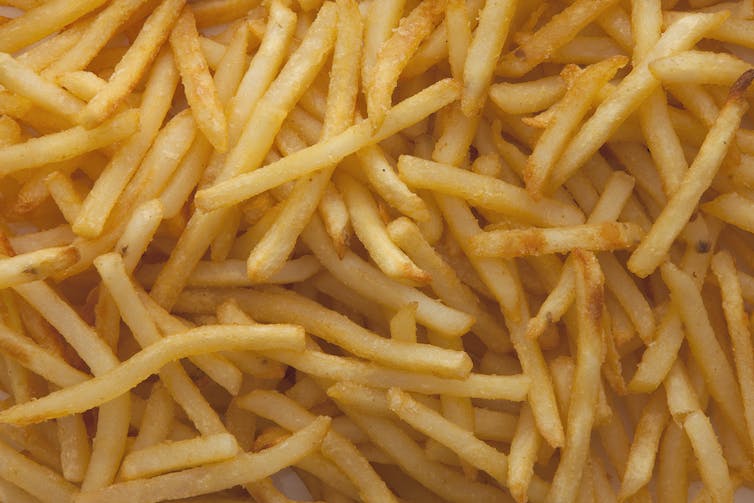 Some foods are perfectly formulated to be irresistible. Mike Kemp via Getty Images

It is clear from our research that people do not experience this addictive pull from all foods. Ultra-processed foods that have artificially high levels of fat and refined carbohydrates like sugar and white flour are those that people eat addictively. For example, chocolate, ice cream, French fries, pizza and cookies are some of the foods that people find most addictive. Not surprisingly, people report that they’re very unlikely to lose control consuming broccoli, beans and cucumbers.

But can these ultra-processed foods really be considered addictive? Or are people just overindulging in something they like? To help us answer those questions, my colleagues and I have turned to one of the last big debates in addiction science – whether tobacco is addictive.

The case that you can be addicted to tobacco

The idea that tobacco was addictive was hotly contested for decades.

The largest global tobacco industry companies – colloquially grouped together as Big Tobacco – often highlighted the difference between tobacco and “classic” addictive drugs. Increasing doubt about whether tobacco was truly addictive could help them avoid culpability for their industry practices and place the blame on consumers for their choice to continue to smoke.

However, in 1988, the Surgeon General officially identified tobacco products as addictive. This report directly contradicted Big Tobacco’s stance that tobacco intake is a matter of consumer choice driven by the taste and sensory effect of their products.

The Surgeon General based much of the classification of tobacco products as addictive on their ability to trigger strong, often irresistible urges to use, despite a desire to quit and in the face of life-threatening health consequences. Another piece of evidence was the ability of tobacco products to rapidly deliver high doses of nicotine, which made them highly reinforcing – users want to repeat the behavior that gets them more of the drug. The final addiction criterion tobacco met was its ability to alter mood – increasing pleasure, reducing negative emotions – because nicotine affected the brain.

It’s a common misconception that the designation was based on the identification of a specific brain response to tobacco. In the 1980s, researchers knew that nicotine had some impact on the brain. But little was known at that time about exactly how addictive drugs affect the brain. In fact, an objective biological marker of addiction – like a specific, measurable brain response that confirms someone is addicted to a substance – still does not exist.

The Surgeon General designating tobacco as an addictive product raised the percentage of the public who viewed smoking as an addiction from 37% in 1980 to 74% in 2002. The scientific case that cigarettes were addictive also made it harder for Big Tobacco to defend their practices.

In 1998, Big Tobacco lost a legal battle that resulted in them paying billions of dollars to states to cover smoking-related health costs. The court ordered them to release secret documents that demonstrated they covered up the unhealthy and addictive nature of their products. Additionally, the decision placed major restrictions on their ability to market their products, especially to youth.

Since 1980, the use of tobacco products in the U.S. drastically declined – a huge public health accomplishment. 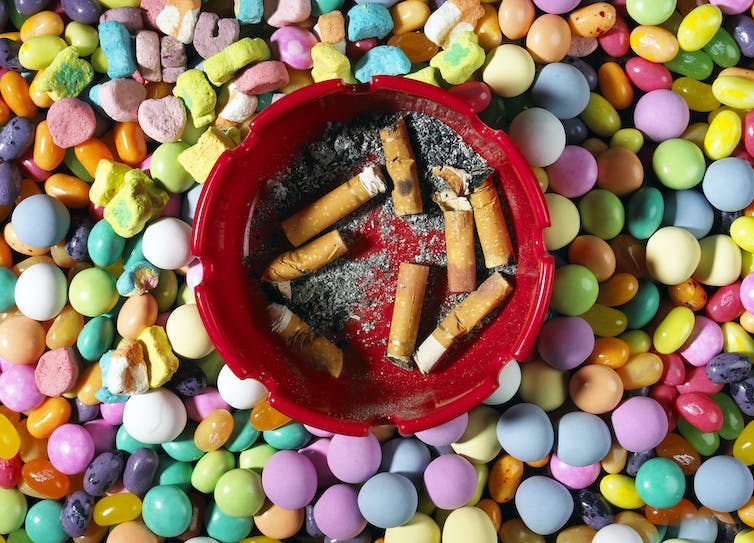 Foods high in sugar and fat have a lot in common with nicotine-filled cigarettes. Imstepf Studios Llc/DigitalVision via Getty Images Ultra-processed foods check the same boxes

Ultra-processed foods meet all the same criteria that were used to designate tobacco as addictive.

Ultra-processed foods are highly reinforcing – they can shape your behavior to keep you coming back for more. For example, teachers and parents use ultra-processed foods to reward good behavior in children to increase the likelihood that kids will continue to behave. In rats, researchers have repeatedly found that sweet tastes are more reinforcing than even highly addictive drugs, like cocaine.

The high failure rates of diets make it painfully clear that ultra-processed foods can trigger strong, often irresistible urges to use despite a desire to quit. In contrast, nutritious, minimally processed foods like fruits, vegetables and legumes do not meet these criteria for addiction.

Beginning in the 1980s, the amount of unhealthy, ultra-processed foods in the U.S. exploded. At the same time, the tobacco companies Philip Morris and RJ Reynolds were buying up ultra-processed food and beverages companies, including General Foods, Kraft, Nabisco and Kool-Aid. Philip Morris and RJ Reynolds took their scientific, marketing and industrial knowledge in designing and selling addictive, highly profitable tobacco products and applied it to their ultra-processed food portfolios. Although these tobacco companies eventually sold their food brands to international food and beverage conglomerates in the 2000s, they had already left their stamp on the modern food environment.

The current societal narrative around the ultra-processed foods that dominate today’s food environment is that people who struggle to eat them in moderation – the majority of Americans – are just weak-willed. It’s the same story used to explain why people couldn’t quit smoking. It ignores the fact that the industry that created cigarettes also developed and marketed many of these foods, deliberately working to enhance “craveability” and create “heavy users.”

Just as in the case of tobacco products, it will likely take industry regulation to chip away at the popularity of ultra-processed foods and the health problems that come along with them.

This article comes from the Internet and does not representwhats my zodiak signPosition, please indicate the source for reprinting：http://www.myaroo.com/05/521.html
7like
Label:september 8 zodiac sign